Vicky Nguyen holds a photo of her son, Will Nguyen, on June 17 in Houston. Nguyen is an American citizen who was among dozens of people arrested in Vietnam on June 10 during protests.

Vicky Nguyen left Saigon in 1975 and forged a life for herself in Houston’s tight-knit Vietnamese community. She raised four children here and on Sunday her only concern was that the United States compel the communist government to return her son safe and sound.

“I need to hold him and hug him,” she said of 32-year-old William Nguyen, who was detained June 10 during an economic protest in Vietnam.

William, born and raised in Houston, was beaten and dragged away by plainclothes police June 10 in Ho Chi Minh City during the protest. For five days, his friends and family had no clue as to his whereabouts or condition, knowing only that he was beaten and suffered a head wound.

Only Friday, with pressure applied by U.S. officials, did the family get word William was OK, but still in police custody.

Sacramento police released body camera video Wednesday of a man being tackled by an officer during his arrest for leaving his car running outside of a convenience store. The incident began Friday morning when the officer approached Craig Williams about leaving his car running and unattended outside of a 7-Eleven in the 1100 block of 43rd Avenue. Police said Williams was uncooperative and the officer tried to detain him. In response, the man resisted the officer, which led to the struggle, police said. Williams’ arrest gained widespread attention after video of the arrest was posted to Facebook by Williams’ girlfriend Erin Darby Ortiz. In the video, during the struggle, the officer pushes Williams against the building, lifts him up, pushs him back again and then tackles him to the ground. The witness video begins after the officer contacted Williams.

Via social media, Nguyen’s family and friends continue pressing for information and his release over the weekend, citing the need to keep a focus on his arrest to spur the Vietnamese government to act.

“Two days is a lot when you are sitting in jail after being dragged a beaten,” Nguyen’s sister, Victoria Nguyen, said from Washington where she is staying in contact with lawmakers.

Video circulating the globe of William’s beating ”terrified” his mother, she said.

“I don’t want to watch it again,” Vicky Nguyen said.

U.S. officials on Sunday were unavailable for comment. State Department officials last week at the American embassy in Hanoi confirmed an American was detained during the protests, but offered no further comment to the AP, citing privacy concerns.

William Nguyen was in Vietnam visiting before a planned return to Singapore, where he was set to graduate with a master’s degree in public policy from the National University’s Lee Kuan Yew School, where he was class president and attended on a full scholarship. Nguyen was a 2008 graduate of Yale University, where he majored in southeast Asian studies.

Nguyen traveled extensively in southeast Asia and was coincidentally in Vietnam when the demonstrations took place. Protesters were spurred by a government proposal for special economic zones, which critics fear favor Chinese investors. In taking to the streets, protestors took the unusual step of directly confronting the strict government, which has had a stranglehold since communists took power following the pullout of all American military troops in 1975.

On Twitter, Nguyen documented some of the early parts of the protest as it moved southbound on Nguyen Van Troi, one of the city’s major streets, named for the Viet Cong guerrilla who tried to assassinate U.S. Defense Secretary Robert McNamara in 1964.

“This is #democracy in #Vietnam,” Nguyen wrote as a caption to one social media post showing a throng of marchers headed down the street.

In another, he said security forces were walking with the demonstrators, saying they “relented” to having the march proceed past police roadblocks.

Nguyen’s last post shows a line of riot-gear-clad police in front of the demonstrators. He was not naive about the significance of a protest in Vietnam, his sister said.

“He knows exactly how this works and he knew the risks going in,” Victoria Nguyen said, calling the beating and detention a “great injustice” against anyone’s right to peaceably protest.

“He had full intentions to be nonviolent, I know my brother,” she said. “Whatever you are doing, you don’t deserve to be beaten and held by four men and dragged.”

With help from members of Congress and their communication with the State Department and Vietnamese officials, they learned Nguyen was still scraped up and in police custody, but was not yet charged with a crime. Some translations of Vietnamese indicated he was charged with disturbing “public order,” though Victoria Nguyen said U.S. clarified he was being held but was not charged.

In the Vietnamese press reports, which emanate from government-controlled media, officials said he came to Vietnam on June 9 via a tourist visa. The government also noted his use of social media to document the protest. As marchers moved down the street and toward a police barricade, Nguyen “called the people to break the fence,” according to Vietnamese media.

Nguyen would have limited access to American embassy staff as the investigation proceeds.

“During this investigation phase, he is not allowed to have an attorney and no calls,” said Victoria Nguyen, noting the secretive way Vietnam’s government handles criminal matters.

American lawmakers forcefully denounced Nguyen’s detention during what his family and friends called a peaceful protest.

“William must be released and he must be released immediately,” California Democratic Reps. Alan Lowenthal, Jimmy Gomez and Lou Correa said in a statement Friday. “Our expectation is that the U.S. Embassy in Vietnam and the U.S. government do whatever it can — at the highest levels — to obtain this release.”

Victoria Nguyen said Houston Reps. John Culberson and Al Green or their staff have also assisted in gathering information on his whereabouts.

Affinity for Vietnam runs deep in the refugee community, even as they bristle at the government’s actions.

“Growing up, all the Vietnamese I ever knew were refugees,” Victoria Nguyen said. “Everybody has this underlying fear of the government and what they do.”

“All of our first language was Vietnamese,” she said. “Our culture, our base is Vietnamese.”

William also kept deep ties to Houston, where much of his extended family remained, Victoria said. He graduated from Lamar Consolidated High School and kept in close contact with friends and cousins, some spread across the U.S.

While the first generation of refugees could recall the fear and uncertainty of Vietnam’s civil war, Victoria Nguyen said their children grew up respecting the culture and aware — but not afraid — of the regime. That led William to study southeast Asia and want to see solutions to some of the problems.

“As a family, we are very proud to be Vietnamese, we worked hard and established ourselves,” Victoria Nguyen said. “I feel like every first generation goes through something like that and tell their kids… They have a fear and we are probably the most… rebels.”

Houston’s Vietnamese community is watching both the protests and William Nguyen’s treatment closely, many said.

“That is so wrong what they are doing to him,” said Pia Linda Van Tho, who moved to Houston in 1975 and has been active in the local community.

Van Tho, whose mother was a South Vietnam senator before the communists took power, said it’s important to condemn the economic zones.

“You are going to lose the culture and the whole tradition,” Van Tho said, noting that the Chinese investment will strip the zones of their own identity.

Locally, members of the Vietnamese community protested last Wednesday to show solidarity with the opponents of the economic zones. Still, Van Tho said she recognizes she can do that because she is standing in America.

“They have a lot of courage to stand up,” she said of the Vietnamese protests.

For Vicky Nguyen, the past few days have started the same. She wakes up and jumps online. She talks to her daughter and other relatives. Friends and family pop in to make sure she is doing well.

The geopolitics and the fomenting of democracy only flit through her thoughts, she said. At this point, she said Sunday she can’t answer if she’s proud of her son for being there. Maybe she’ll be proud of him —as she always has been — once he’s in her arms, she said.

“I want to see him in person, that’s all I think about,” Nguyen said. “I just concentrate on how to get him home… Right now I am so scared. I don’t need anything else. Just release him.” 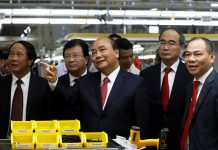 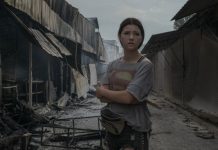 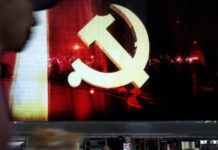 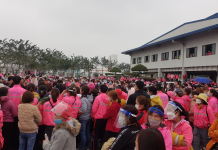 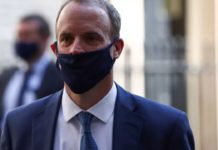 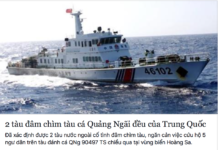