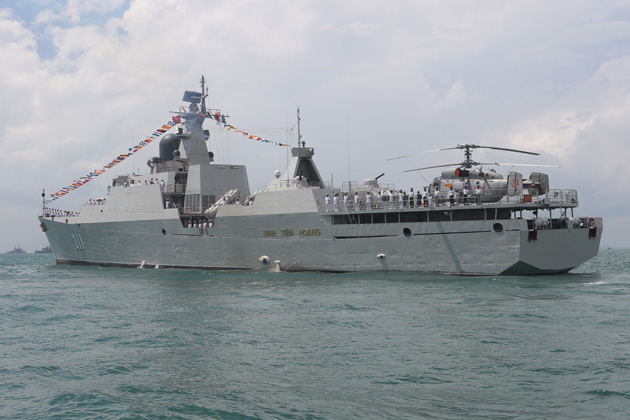 The China-Vietnam relationship might be less complicated than Washington would wish, despite Beijing’s recent threat to use force against Hanoi to stop drilling in the South China Sea.

Interestingly, there was nothing in the 31 May joint statement issued by President Donald Trump and Prime Minister Nguyen Xuan Phuc that would commit the US to assisting Hanoi in its current dealings with Chinese threats.

Those in Washington who see Vietnam as a potential ally against China have quite possibly ignored the powerful and corrupting influence of cross-border trade between China and Vietnam.

While attending IMDEX in Singapore in May, a senior US defence industry source told Shephard that a recent meeting in Hanoi ended abruptly after Ministry of Defence officials informed the US delegation that an arms sale would require ‘25% off the top’. A secondary source in Singapore also said that Vietnam government officials were laundering money in Singapore via their wives.

The US is forbidden from conducting business in this manner due to the 1977 Foreign Corrupt Practices Act, which makes bribery a federal crime. This might explain why Vietnam will continue to rely on Russian weapons and thus nix any true military-to-military cooperation between the US and Vietnam.

It has been recently confirmed that Vietnam will purchase 64 T-90S/SK tanksfrom Russia, and that Russia is offering Vietnam the S-400 air defence system and MiG-35 fighters to replace Vietnam’s retired fleet of MiG 21s.

If Vietnam opts for the MiG 35s this will end all hope of Vietnam following Indonesia in purchasing F-16A/Bs from the US, said Carlyle Thayer, emeritus professor at the University of New South Wales at the Australian Defence Force Academy.

There are other problems facing joint US-Vietnam military cooperation.

One is Vietnam’s ‘Three-No’s’ defence policy: no military alliances, no foreign military bases on Vietnamese territory, and no reliance on any country to combat others, Thayer said.

‘Coupled with deep suspicion of the United States on the part of both retired and active-duty senior military officers, [this] mitigates against any marked stepped up in defence relations,’ he added.

If we have learned anything about Vietnam in the past half century, it is that no one pushes Hanoi anywhere it does not want to go, said‎ Ralph Cossa, president of the Pacific Forum CSIS in Honolulu.

‘There is no love lost between Hanoi and Beijing, but the Vietnamese will be careful not to openly take sides with anyone. That said, there has been and remains an excellent opportunity for Washington and Hanoi to deepen their partnership, and China provides added incentive for both to do so,’ Cossa noted.

The US and Vietnam signed a memorandum of understanding (MoU) in 2011 that set out five priority areas of cooperation: maritime security, search and rescue, humanitarian assistance and disaster relief, exchanges between defence universities and research institutes, and UN peacekeeping operations.

However, the 2011 MoU has been disappointing for the US, Thayer said. For example, Vietnam turned down an invitation by then Secretary of Defense Ash Carter for Vietnamese military officers to fly on and observe P8 Poseidon maritime patrols over the South China Sea.

There is incrementally closer alignment but no alliance in the offing, said Patrick Cronin, a senior advisor and senior director of the Asia-Pacific Security Program at the Centre for a New American Security.

‘Vietnam preserves a balance of interests and the United States is keener to bolster Vietnam’s self-defence than provide a security guarantee. That said, it may depend on just how assertive China becomes should it succumb to a maritime Middle Kingdom mentality.’

However, there has been activity on coast guard matters. In May, Vietnam’s Coast Guard took delivery of six new Metal Shark 45-foot Defiant patrol boats and, in April, handed over a decommissioned US Coast Guard Hamilton-class cutter.

For now, Hanoi appears to be interested mainly in enhancing deterrent effects via modest defence cooperation with the United States, said Richard Fisher, senior fellow at the International Assessment and Strategy Center.

‘While Vietnam has diversified its arms sources in the last decade, it has been careful to avoid dependency on the protection of a foreign power.’

China’s 1979 invasion of Vietnam, no matter how poorly executed, demonstrated to Hanoi’s leadership that a foreign friend is not going to protect them when there is a risk of war with Beijing, Fisher said.

‘China is not pushing Vietnam into a new embrace with the Americans. More to the point, it is pushing Hanoi into acquiring nuclear weapons – which will scare Beijing far more than an alliance with Washington,’ Fisher warned.